Life on the Bike and other Fab Things

A quick trip to Charlotte, NC offered me a chance to have a mini 12 hour vacation.  The day was beautiful for driving (I very much regretted not riding the bike) and I met friends in Uptown.

How wonderful it was to walk and wander, to point and shoot, to breathe and relax.

As an aside: I wondered why the residents of Charlotte call it Uptown and learned that this is a common question, one that Brad Panovich, Chief Meteorologist a WCNC-NBC TV answered in this blog post.

While I have many photos to work through and share, I loved the contrast between these two. Without a tripod, I took one with, and one without, flash.  The mood changed dramatically in comparison, and the second begged to be converted to monochrome.

while the second encourages you to turn around and head…

My very first blog post was in 2012 and I posted regularly until late in 2018 when somehow the fullness of life and work kept getting in the way. Back when I began, the goal was to “be able to look back on my life later and remember what a fabulous one it has been”, and by fabulous I mean truly fortunate. I intended to have Life on the Bike be a journal, of photos and words.

Each year, I create a desk calendar for family, friends, and personal use, and when exchanging the 2021 calendar for 2022, I noted one thing for sure. While my eye may be the same, my technical capability has markedly improved. Even still, it was fun to go back and view the years through my lens, and that is what I want this space to be. A record of travel and personal growth. Thoughts, introspection, and life’s journey. In order to make that happen, I need to commit to blogging more regularly!

Since 2012, I have published 738 posts, yet this past year I posted just 24 times, only 3.2% of the total posts. What should my commitment be? Weekly? Two Times Monthly? Only when I travel? How do you all commit yourself to documenting your lives?

In the meantime, from my hometown to yours, Welcome to 2022! May it be a healthier, more hopeful year for all of us!

Yesterday I had the good fortune to attend a gathering with some of the board members of the National Women’s Political Caucus – Virginia (check us out!) at a super fun place called The Wool Factory, “a unique collaboration between chefs, brewers, winemakers, and coffee roasters aimed at creating a distinct food-and-beverage destination”.

As always when I travel and explore new places, I must know the history and the Wool Factory’s website provides it! Originally a water grist mill (1795), and later burned by the Union Army (1865), the Charlottesville Woolen Mills was established in 1868 and “became nationally known for their excellent production of fine military fabrics and uniforms, furnishing cloth for the majority of railroad workers and military schools”. The mill closed in 1962 and “the majority of the surviving mill buildings standing on the site today were built in 1920-1930s”.

What a cool, cool place this is! The beers are named after the original wool fabrics that were produced at the mill. Needing a light cold beer after a 100 mile motorcycle ride, I opted for the Poplin followed by the Flannel No. 2. These paired well with the Peruvian Chicken.

The excellent company of board members and friends kept me from exploring the site further, but I will be back with camera again in hand for further photo ops and the trying out of new beers (they also have cocktails!) and elevated bar food.

If you are near Charlottesville, Virginia be sure to plan a visit to this historic woolen mill.

Thank you, Joe, for putting into words what many are feeling. My thoughts are with her family and friends the world over.

It is with deep regret that I wish to inform our followers that my dear friend and fellow Monochromia contributor Patricia Fogarty (aka Patti Kuche) has passed away. She is survived by her loving husband Mark Fogarty and her sons Iggy, Dom and Patrick. All of us at this blog want to extend our deepest sympathy to Mark and family. She will leave a void in hearts of the many people who have had the pleasure of knowing her.

Patti was first and foremost a great street photographer. She was also a dear friend and a genuinely fun person to be around. My wife Theresa and I had a special connection with Patti. We adored her mixture of Australian and London brogue accent and I don’t think there was ever a time where she failed to make us laugh when we got together.

Oh how I have missed riding the bike! 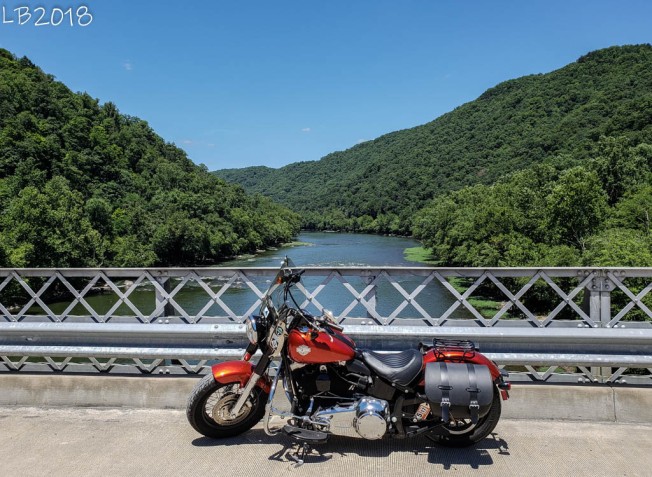 The passion for travel with my sweetie, the drive to elect women and men who share my values (ie the values of Presidents Obama and Carter), and the hours at work have diminished my time on the bike significantly.  The desire to ride, however, is ever present in my mind and two weeks ago, I finally had a weekend without travel. I spent one whole day riding 225 miles through Virginia and West Virginia. Happiness! The destination was Thurmond, West Virginia, an early 1900s boomtown.

We had many miles to ride before arriving in Thurmond, and our first stop was Bluestone Dam, a popular place for bass, catfish, crappie, and bluegill fishing.  After a brief stop to look at Bluestone Lake and dam, we were off through New River Gorge country.

While the others took off down a gravel road, I stopped for some photography.  I did not know when shooting this image that I was looking towards the historic Thurmond bridge. 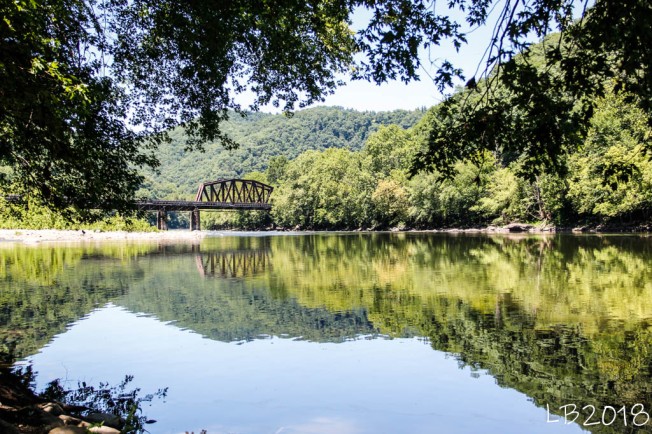 The bridge has been rebuilt and rehabbed a few times, but the original bridge was built in 1889. 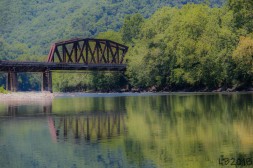 If you know me, you know I love a bridge, and I had to park the bike and walk out to capture this image looking down into the river. 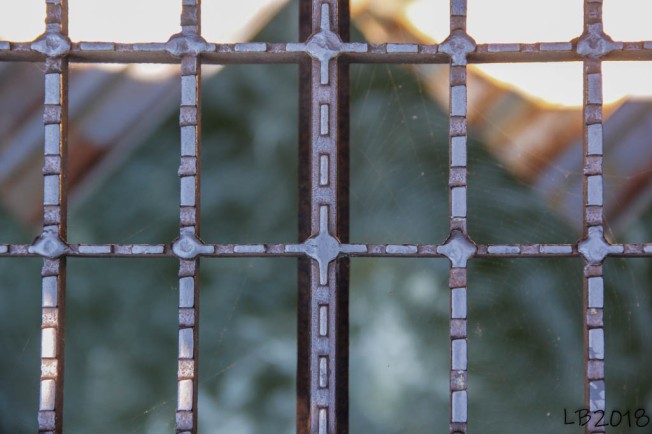 The view down river from the bridge

The National Park Service restored the Thurmond Depot as a Visitor’s Center in 1995, and the NPS has made learning the history of Thurmond a walkable experience. 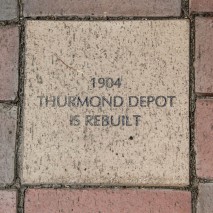 Two major fires, the arrival of roads, and the switch from steam engine to diesel engine led to the town’s decline.  Thankfully, the outdoor adventure industry and commercial whitewater rafting through the New River Gorge National River, have revitalized the area. 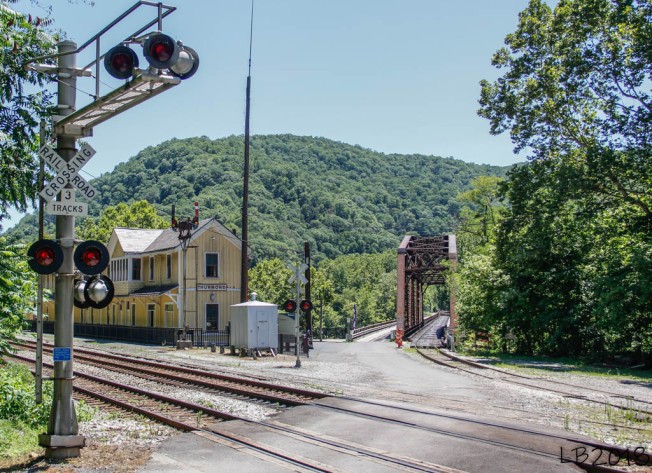 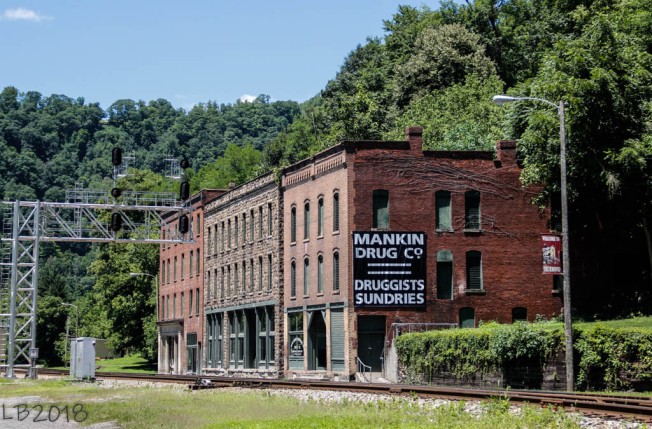 “Presently, the park owns approximately 80% of the town of Thurmond, including the historic Thurmond Depot. Three times each week, Amtrak uses the Thurmond Depot as a passenger stop and coal trains continue to roll through town hourly.  Though it is a shell of its former self, the historic town of Thurmond still stands as a reminder of the past. It truly is where the River meets History”! http://thurmondwv.org/about/history 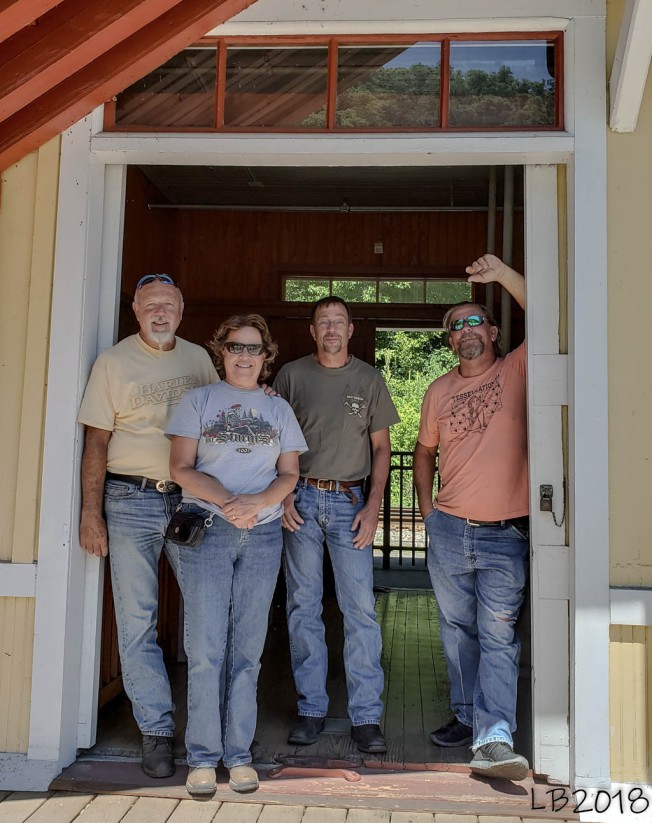 It was a gorgeous day, perfect for riding, only made better by being with good friends.  Learning some history just added to the experience.  One more thing: the movie Matewan was filmed in Thurmond, WVA. 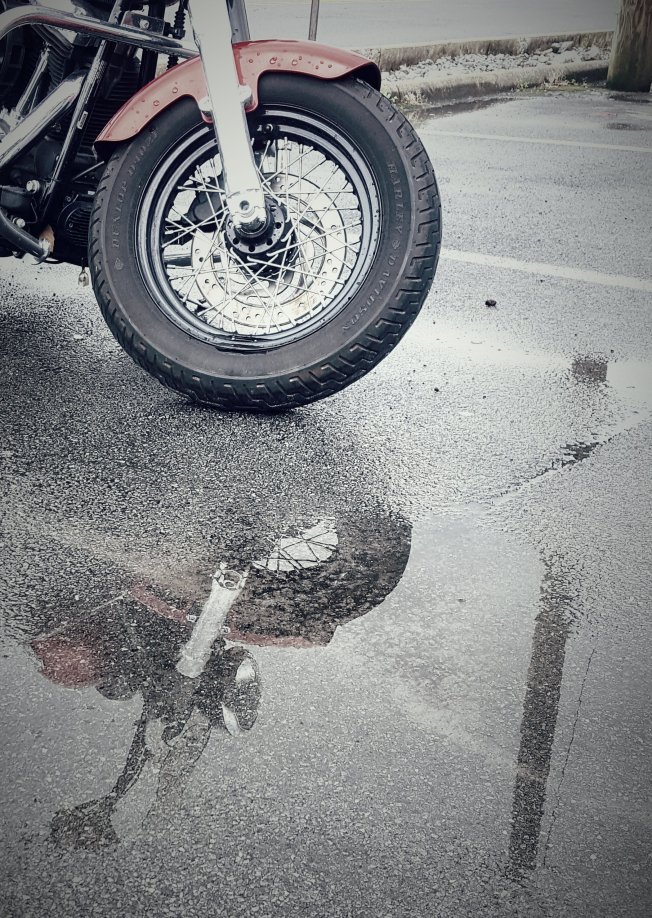 Caught in the rain. Worth it … for the ride and the image.

I’d hoped to rent a motorcycle and take the ride of a lifetime, but between the cost of rentals and the fact that I couldn’t find a bike to fit my 5′ tall body, I opted for a rental car.  I have to confess to feeling a bit nervous about driving in Australia.  I wasn’t so much worried about driving the Great Ocean Road, as I was about getting out of Melbourne!  I even told the folks at the rental agency that I’d pay someone to drive me out of the city 🙂  Ultimately, it all turned out perfectly, and while the car was a blast, after driving that road, I sure wish I could have ridden those curves on my Harley.

The Great Ocean Road is included on the Australian National Heritage List and at 243 km (151 mi), stretches along the south-eastern coast of Australia between the cities of Torquay and Allansford.  Construction on the road began in September of 1919 and was built by approximately 3000 returned servicemen as a war memorial for fellow servicemen who had been killed in World War I.  In addition to being dedicated as a memorial, the road also connected isolated settlements on the coast, and become a vital transport link for the timber industry and tourism.

As a visitor to Australia, seeing these signs along my route were welcome, and within minutes of driving out of the city, I stopped at my first Visitor Information Centre.

The incredibly friendly and informative folks at the Centre loaded up a reusable bag full of maps and pamphlets, which suited this map loving woman just fine.  GPS is great, of course, but I like to say that I use MAPS.  The volunteers recommended that I stop in Geelong, and I’m so glad that they did.   Located just southwest of Melbourne, Geelong  boasts a 19th-century carousel, a curved art deco boardwalk , and a several colorful sculptures that chronicle the city’s history.

After a lovely stroll along that curved boardwalk, I took off for Torquay, the surf capital of Australia, and the start of the Great Ocean Road. 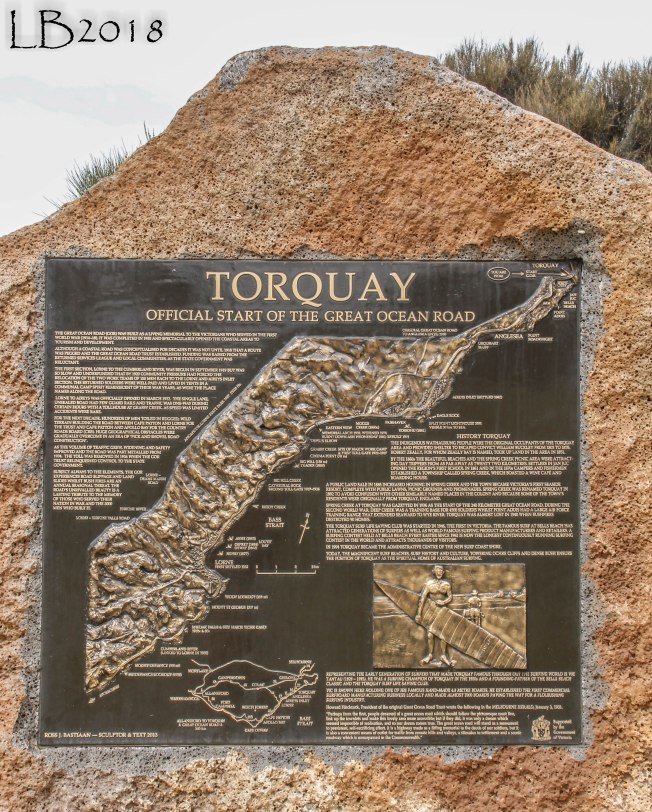 I mean, seriously! I think I pulled over at every possible place!  Including the Cape Otway Lightstation, built in 1848. 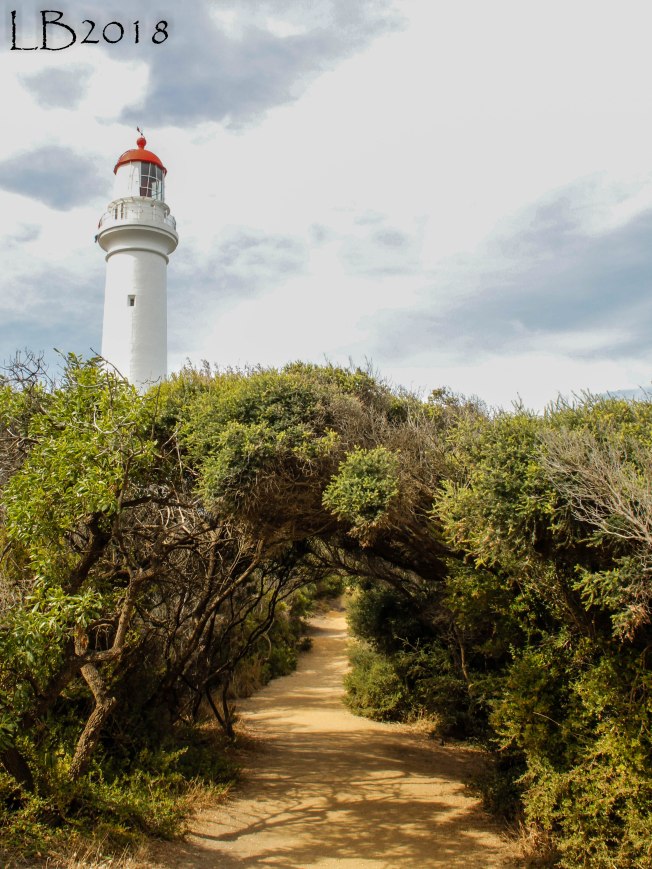 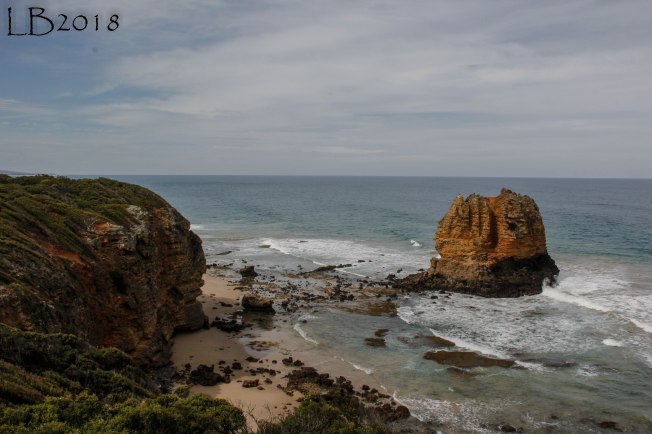 What an incredible gift it was to have the time to explore.  I had no plan other than to go, to see, to breathe.

The sound of those waves crashing on the shore were captivating, and in my next post, I’ll share some video.

The curves were fun to drive, and every so often, I was pleased to be the only car on the road.  At times, it seemed I could have been driving the Blue Ridge Parkway, as the road wound through lush, forested areas.  At other times, the road took me along the dramatic coastline.  I could have taken weeks, not days, to visit the many natural and historic wonders of this road, and I could have taken thousands and thousands of photos.

At the end of an amazing day, I stopped at the  Great Ocean Road Brewhouse for fish and chips and a nice, cold beer.  On this particular day, I’d worn one of my Harley t-shirts and as always happens when I travel, people come up and talk to me about motorcycles.  Even in this day and time, a woman who rides her own bike is still a big deal.  We also talked about the bracelets on our arms, representing loved ones gone too soon.

Next Post: Day Two on the Great Ocean Road

Pauline arranged for the most fun outing: a 5 person trike ride around Dunedin and Otago Harbour!  This bike chick loved it, as did everyone else.  What a blast! 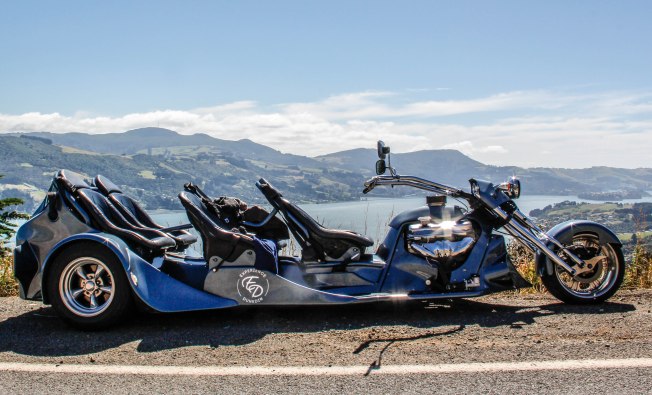 We met our guide Andrew, owner of Experience Dunedin at The Octagon in the Central Business District of Dunedin, and soon we were off. 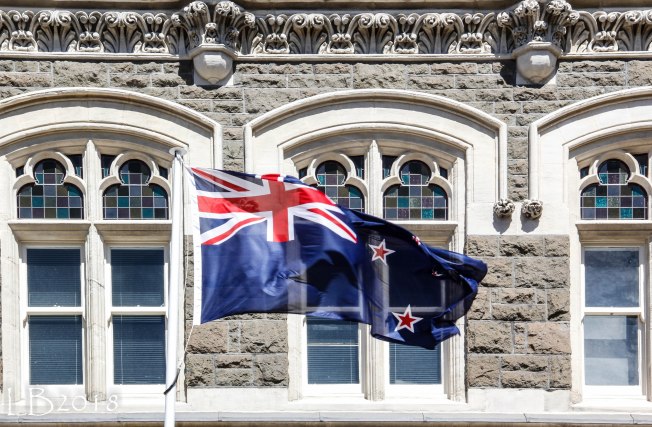 Andrew obligingly hit the gas and we found ourselves hooting out loud with excitment!

The roads were curvy and changed elevation frequently, and I was reminded of riding back home in southwest Virginia.  Well, except for the “wrong side” of the road thing. 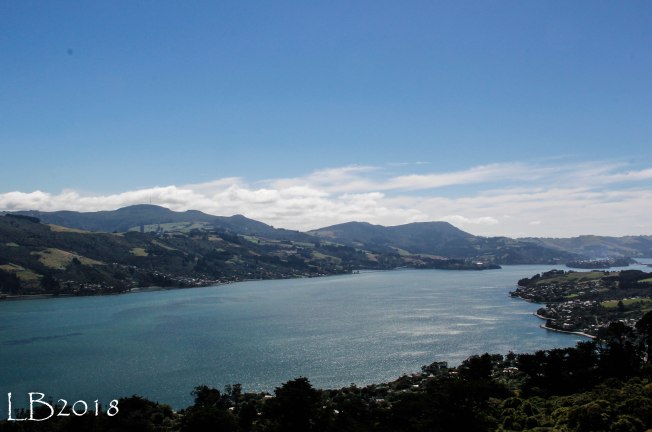 The views of the harbour were incredible and these photos do not do them justice. 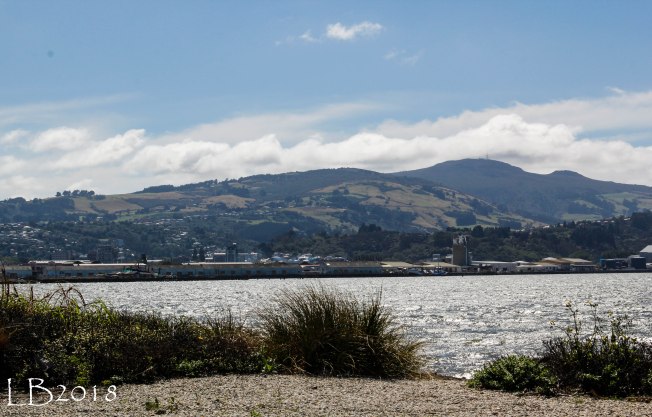 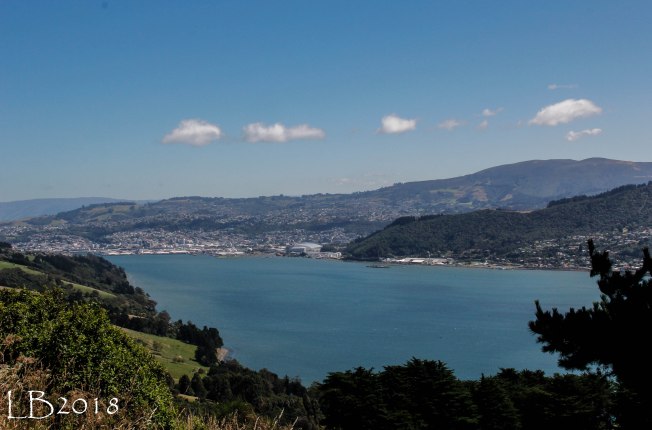 Alys took some great photos with her selfie stick, so please visit her blog to see more!

Thank you, Pauline, for arranging for this fun, fun outing, and to Alys for treating us!

Grateful that @jtlafalot captured this image a week ago. Time to shoot = Happiness.
Life on the Bike and other Fab Things
Blog at WordPress.com.
Loading Comments...
%d bloggers like this: