Those of you who have visited before know that I spend what little free time I have on my motorcycle.  Before I bought that bike, though, I used to ride this bike.  Sadly, the bicycle has been neglected these past ten years.  Until last year, I would only get on the bike for the Ride of Silence.  After last year’s ROS, I made a commitment to ride more often, and I kept that commitment until winter, riding at least 20 miles weekly.  That’s not much for serious cyclists, but it was good for me.

Every year, my community hosts the Wilderness Road Ride, and cyclists can choose the 29, 38, 58, or 79 mile route.  I’ve ridden in the WWR a few times since it’s inception 26 yrs ago, but it had been many, many years since I’d participated.

Three weeks ago, I challenged myself to ride the 38 mile route even though my training has been non existent.  I decided that I would go alone so as not to have to keep up with anyone, to take my time, and to shoot photos for a blog post.  As expected, I saw many people who had better gear and were in much better shape, but I was determined!

After just a couple miles, I stopped at the memorial garden in our local park where there are several monuments, one dedicated to each of the wars where men and women have served and lost their lives.

Then I continued on down The Riverway, our city’s bikeway / walkway.

Soon enough, I was out on main roads, and thankful for a respite from a week of rain and flooding. 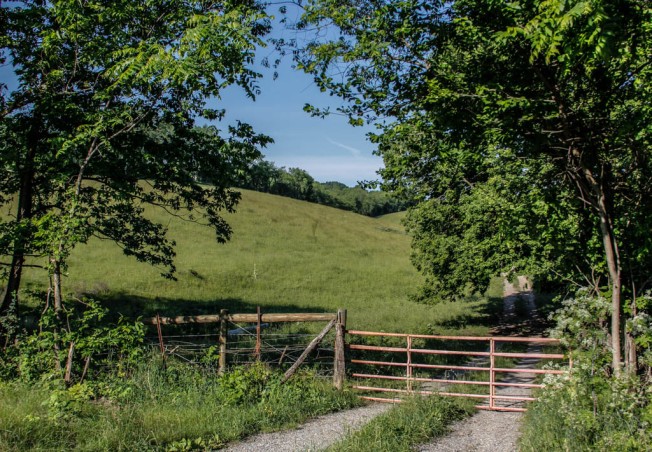 This was a long steady climb (at least for me) 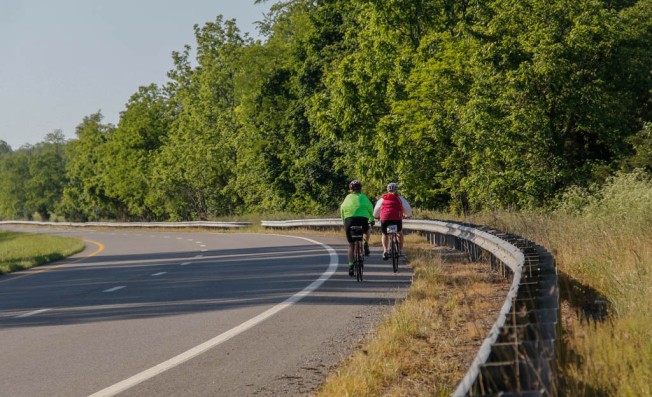 which led to roads with this expansive view. 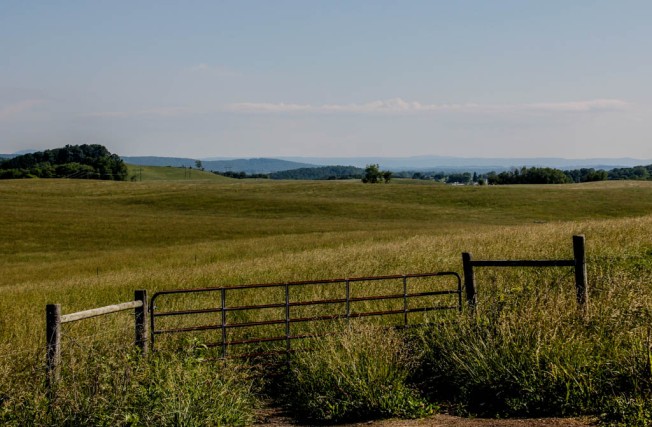 The route took us over Interstate 81, where flags are always placed in preparation for Rolling Thunder, an annual motorcycle ride to DC.  The ride to the nation’s capital is held to honor POW and MIA service members and thousands of  bikers participate. 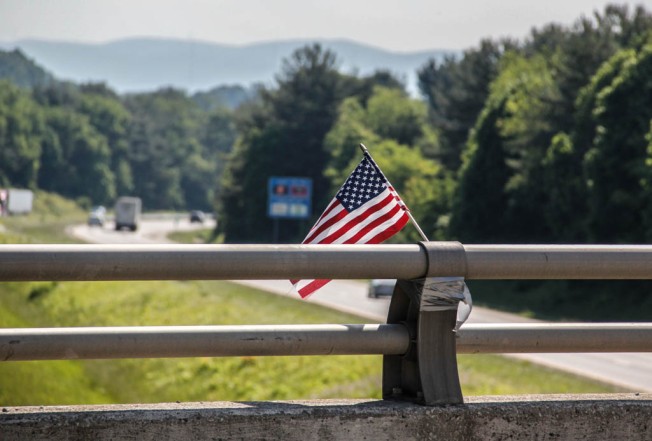 I hit the 20 mile mark around this time, and these very friendly women glided on by with no effort.

That’s okay though, I kept my spirits up knowing that the rest stop was just a few miles ahead.  The scenary just kept getting prettier, 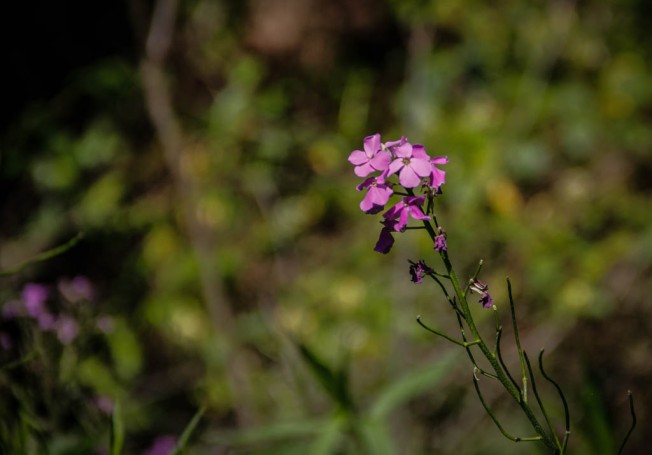 and these two probably wondered why I didn’t keep riding on by like everyone else.

FINALLY! At 22 miles, a rest stop! I was able to refill my water bottle, eat my PB on pita, and take a short breather. 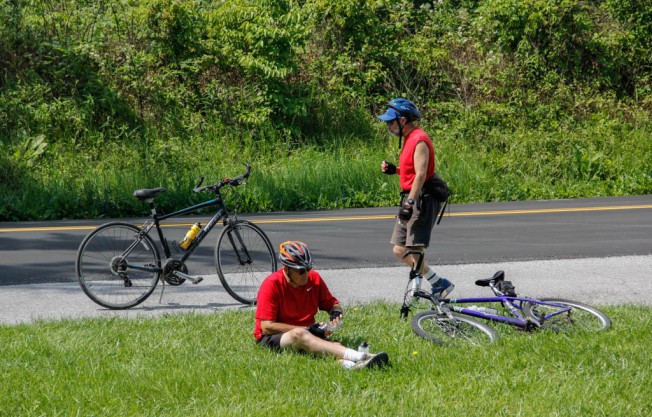 I have to confess that while I was having no problem on the flats, the hills were proving to be a bit challenging.  Despite my “I can do it” attitude, my lack of training was showing.

I stopped to take this image, and the two farmers standing near by said “you didn’t really want to take that photo, you just needed a break”.  I laughed and told them not to tell anyone as they were partially right!  They also offered to put my bike in the back of a truck and take me home, but I declined and kept on riding.   It’s a great image, though, right? 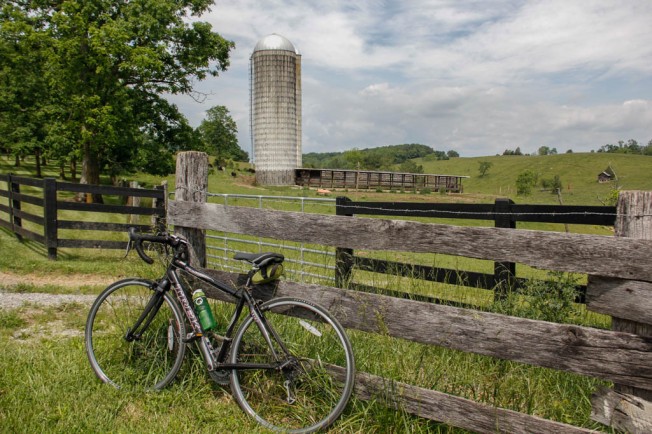 I didn’t stop too much after that, deciding that my energy needed to be focused on getting back to the truck.  Then I saw one of my favorite signs, and had to stop for a picture.

At about the 34 mile mark, the clouds started moving in and the breeze picked up.

BUT it NEVER rained, and I finished the 37 mile ride. 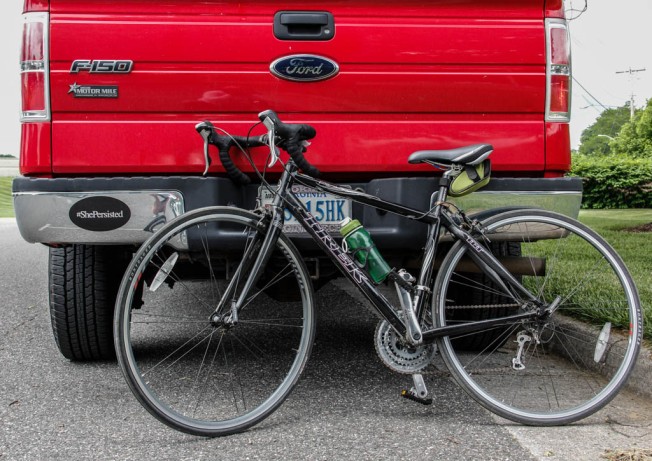 Did you notice that I said 37 miles vs 38 miles?  I had to bypass one big, big climb, but all in all, I was really proud of the accomplishment.

39 thoughts on “My Other Bike”