Debbie turned me on to the coolest place to stay in Nashville! The Scarritt Bennett Center “was organized in 1988 as a non-profit conference, retreat and educational center, committed to empowerment through cross-cultural understanding, education, creativity and spiritual renewal”.

That sounds like pretty heady stuff, doesn’t it? All I know is that it is perfect for the person traveling solo. $50 gets you a twin bed and a bathroom. What more could I want?

The center was initially founded in Kansas City, Missouri, and was established for the purpose of training young women missionaries. It moved to Nashville, Tennessee in 1924, where it became Scarritt College for Christian Workers. Scarritt Hall, Bennett Hall, the Tower and the Chapel, known collectively as the Belle Bennett Memorial, were built between 1924- 1927 (just a little background history for you). The center is now owned by the United Methodist Women.

I was up early, walking the campus and of course taking a bunch of pictures! The gothic architecture and beautiful grounds made for great photo ops and a lovely morning walk. 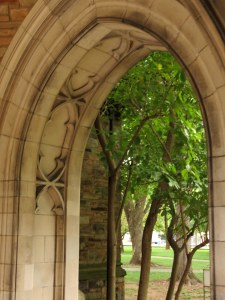 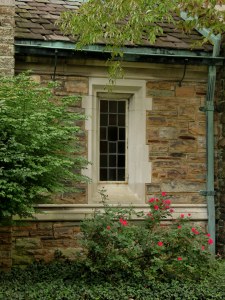 Not surprisingly, I soon got hungry and decided to walk off campus in search of a local place for breakfast. I passed on Starbucks, Panera, Hardees and Bruegers before I saw it – Noshville! A Nashville institution! I sat at the counter and enjoyed an omelet while listening to Crystal (my server) tell me all about this city. She got right into my desire to find funky/fun places to visit. She also brought me a sampler of the restaurant’s famous pickles as well as one of their Black and White cookies. Evidently, when they run out, folks get a bit irritated. I can see why – shortbread cookie with a not too sweet frosting – yum! 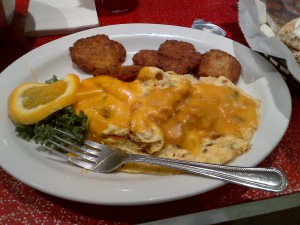 After a drenching rain, with plenty of thunder and lightning, I set off to explore downtown. I was of course aware that Nashville is known for it’s music scene, but I was ignorant about it’s history and the city’s many beautiful old buildings. Nashville should advertise that more … Or perhaps they do and I just haven’t paying attention.

I walked the entire length of Broadway (21 blocks), even though the front desk staff warned me that these are “city blocks”. As opposed to “country blocks”? 🙂 Whatever kind of blocks they are, I sure worked off my breakfast! 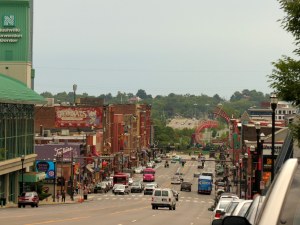 I walked inside the lobby of the Union Station Hotel, the original passenger rail station, built in 1901 and now a Historic Hotel of America. It was also designated a National Historic Landmark in 1977 and is stunning. “The barrel vaulted ceiling is made of 128 pieces of stained glass” and the entire building reminds us that “railroad was once King and artistic craftsmanship was the mark of a distinction” (from the hotel history).

I also toured the Ryman Auditorium, home to the Grand Ol opry for over 3o years.  How very cool to see that famous stage, and to read about the history of the building and the musicians and actors who performed there. 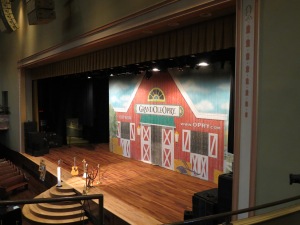 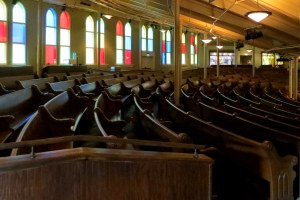 I very much enjoyed my flight of microbrews, along with the shredded pork/pineapple salsa tacos at Big River Grille. Thanks to a cooling breeze and a prime spot on the patio, I had great opportunity for people watching. 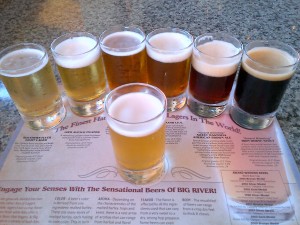 From there I wandered down to the river and then walked across the Shelby Street Bridge.  The bridge was originally constructed in 1909, was rehabilitated in 2003 and now is primarily a walking path across the river.

A visit to Buck Wild Saloon on 2nd Ave was definitely in order (mostly because Andrew seems to have picked up that nick name … can’t imagine how). There’s something fun about seeing karaoke in full swing at 4p in the afternoon. Even better was when the whole bar crowd (including me) joined in to sing Sweet Caroline at the top of it’s lungs!  I enjoyed the company of my new friend, Raynell, the bartender, who served me ice cold beer as we talked and laughed together. 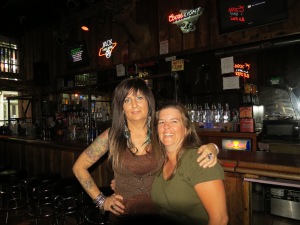 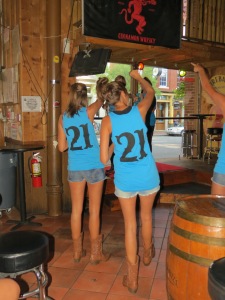 I talked to an 18 year old girl, recently arrived from Kentucky, who is hoping to make it big in Nashville. I wonder how many young people come to this town every year with that same dream?

I met up with Debbie’s niece, Tina, for dinner at the Flying Saucer, which has a most amazing beer selection – hundreds and hundreds to choose from. The restaurant is located in the historic train station and the walls and ceilings are covered with thousands of decorative plates. 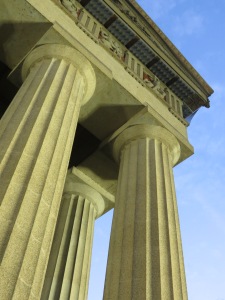 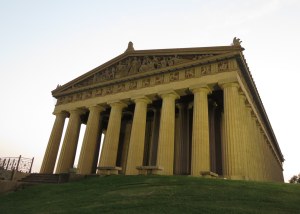 Who knew that Nashville has an exact replica of the Greek Parthenon? Not Me! Originally built for Tennessee’s 1897 Centennial Exposition, “this replica of the original Parthenon in Athens serves as a monument to what is considered the pinnacle of classical architecture”. It was an amazing site to see, especially against the evening sky.  Do you see me standing there?  That structure is massive and stunning to see! 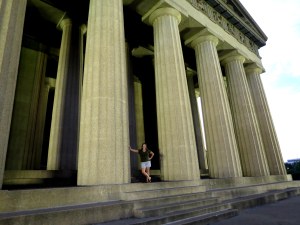 What an incredible day this has been! Of course there was music and food, but the history, buildings and people were a wonderful surprise. I’m ready to get back on the bike tomorrow, but I sure have enjoyed this layover day in Nashville!  Next time, I’ll stay more than 36 hours!